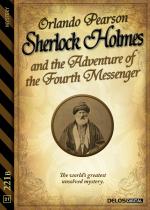 Sherlock Holmes and the Adventure of the Fourth Messenger

Soon after Holmes’s return from apparent death, Holmes and Watson return from a walk through London and find a preacher waiting for them. He wants their help in writing his account of the life of a religious leader in an Eastern Mediterranean country whose death has caused unparalleled speculation.

Shortly afterwards, the preacher is abducted.

The great Baker Street detective investigates before opining on the reliability of the testimony of the preacher. Holmes adduces some startling reasons for believing in the historical accuracy of the preacher’s testimony.

Orlando Pearson, creator of the well-known Redacted Sherlock Holmes series, commutes into London during the day and communes with the spirits of Baker Street by night.

An international businessman, his interests include classical music, history, literature, current affairs, sport and economics. All these themes find their way into his stories which are being translated into German and Italian.

Mr Pearson is married with two children and lives near Wisteria Lodge.